Since moving Ruby Fury into shop premises last November, it’s felt more like a ‘proper’ business than when I was running it from home. So, when I saw entries were invited for the Exmouth Chamber business awards, I thought I’d give it a go.

Putting into words on an application why I think I deserve an award didn’t come easy. Thankfully, public nominations were encouraged to support the application, and I knew a lot of my supporters had kindly taken the time to send those in.

Close to 500 businesses had applied, so the odds were stacked against me and I didn’t really think much more about it. But….a few weeks later I found out I was in the final 3 in my category. I was ecstatic!

Things were getting serious now, and I began to panic. Would I attend the awards ceremony? Only one ticket was allowed per business so I’d have to go alone. What on earth would I wear? I hadn’t been out for what felt like years and since lockdown all my dresses were a bit tight! And worse still, they wanted all the finalists to make a video introducing themselves that they’d play on a big screen on the night. WAY outside my comfort zone! But it was too late to back out so I took a few deep breaths, booked my ticket, made the video, and decided to make a basic dress out of Ruby Fury fabric to represent the brand.

The awards night came around quickly and with covid rules still in place, I didn’t really know what to expect. I found myself in a “table bubble” with some other business owners and a couple of the sponsors. After the initial awkwardness, the drinks started flowing and everyone relaxed into having a good time. After what seemed like a never ending buffet and huge plates of chocolate brownies, the awards ceremony began. A lot of people cringed as their own video was shown on the big screen for all to see. Then the best small business category came around. And they called out Ruby Fury as the winner!

I felt proud and emotional while collecting the trophy. I’ve always been so grateful for the support I’ve had throughout the whole Ruby Fury journey. The incredible people I’ve met along the way are what keeps me going through all the challenges (and there have been a lot of those recently!) This award is for all of you ♥ 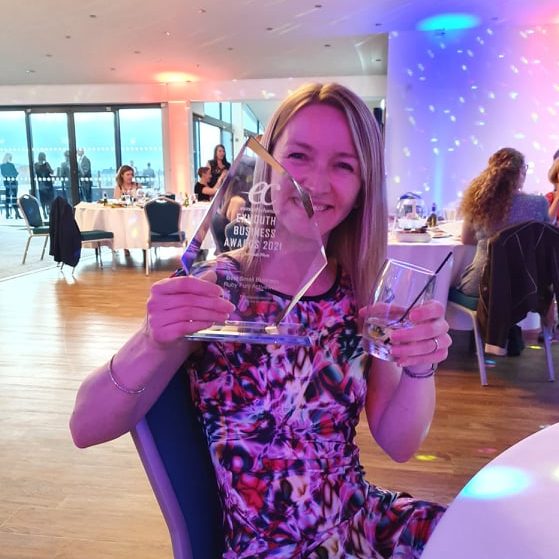